The mainsail is made from ODL06 and has been built with a radial Head and Clew for longevity and stability. The Jib is made from RS4 and is a high aspect ratio cloth which works really well for the Fireball, it gives great stability and with a very fine rip stop makes it last longer. The Spinnaker is made from SuperKote 75 and built using cross cut panels on the shoulders and radial clews for stability. 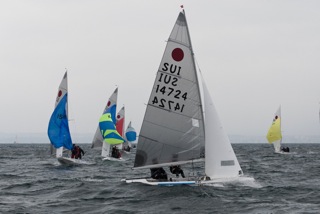