Current Irish National Champions Shane MacCarthy and Andy Davis won all three races at the Leinster Championships. This year the Leinster’s were held at Greystones. 6 races were scheduled but only three completed, Saturday started off with quite light winds but built later in the afternoon to give superb flat out reaches. Sunday the forecast was not so great, the race officer tried to start a race but with very light wind and tide in the same direction it certainly made it difficult to get over the start line, only a handful of boats managed to make it over line and with that the race officer canned the race and the day.

Shane has now won the Leinster’s 3 years in a row and showing great boat speed is certainly looking forward to the World Championships in August.

If you are thinking of GP sails for this years Worlds please don’t hesitate and get your order in soon so you don’t miss out, order slots are filling up fast! 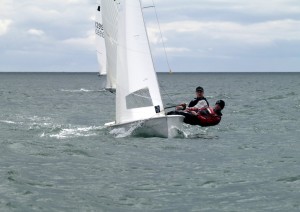 Saturday saw 30 Merlins venture outside Poole harbour to race around an olympic course. It was a beautiful sunny sky with a wind around 18 knots and gusts of 26 knots, only 12 Merlins ended up finishing the third race. Andy Davis lead the first race being the only one to fly his kite down the first reach, unfortunately on the last lap he capsized, Jon Gorringe & Toby Lewis came through the fleet after a bad start and went on to win. Second race saw Andy Davis & Ellie Bremer Lead round the windward mark, once again it came to the last lap and Andy capsized at the gybe mark. Jon Gorringe having sat in second all the way round went on to take the win with Andy in second.  In the final race is was Jon Gorringe to lead around the windward mark with John Ibbotson second and Andy in third. Jon Gorringe built up a substantial lead down the first reach. John Ibbotson capsized at the gybe mark which allowed Andy to move into second. Showing great upwind pace Andy caught Jon Gorringe up and with a tacking battle up the last beat saw Jon just pip Andy by quarter of a boat length.

Unfortunately we used all the good weather up and Sunday brought drizzly rain but also wind. This time three races were held inside the harbour with racing around the cans. Thankfully we had a lead boat to guide us around. Richard Whitworth was first around the windward mark followed by Andy & Ellie and Jon Gorringe & Toby Lewis. Richard built up a lead around the back of Brownsie Island but using his local knowledge managed to sail the wrong way around the mark and had to double back on himelf, this then allowed Jon and Andy through. Jon went on to take the win with Andy second and Richard third. In the Second Andy Davis lead around the windward with a substantial lead which was never challenged, new sailors to the fleet Ben and Roz Mcgrane sailing their new boat for the second time sailed round in second but being pushed hard by Dave Hayes & Johnny Radcliffe. Dave managed to pass Ben up the beat so finished second with Ben third. In the third and final race of the weekend Andy Davis was blacked flagged and pulled out up the first beat, Ben Mcgrane lead around the windward mark. Jon Gorringe rounded the windward mark in fifth and manged to show excellent pace downwind to take the win from Steve Leney.

All in all a great weekend with varied conditions and HD Sails showed superb pace through out all the wind ranges, Overall Jon Gorringe & Toby Lewis finished on top with Andy Davis & Ellie Bremer in second.